The third edition of the Maharashtra Open will be played in Pune in February 2020 with some of the top players in action in the competition. And if you are looking for the latest information on the Maharashtra Open tickets for the ATP Pune for this season, we have it all covered in this article below.

The 2020 Pune Open will be played between February 3 and 9 with the qualifying rounds to be played before the start of the first round matches on the New Year’s eve. This is after it was postponed from the first week of January to after the Australian Open.

Kevin Anderson will kick-start the 2020 edition of the Maharashtra Open as the defending champion after he won the title last year by beating Ivo Karlovic in the final. Before Anderson, it was Gilles Simon who had triumphed in the 2018 final beating Anderson in the final.

Stan Wawrinka, who hadn’t competed here since 2018 season of the Maharashtra Open, has won the title – the Chennai Open title – four times, the most by any tennis player. With injuries having played in Wawrinka’s recent times as a player, it would be interesting if he opts to return to feature in the Maharashtra Open.

It’s very easily India’s most prestigious tennis event that was first played all the way back in 1996, in the capital city of Delhi. Since then, it was moved to Chennai in 1997 where the tournament was hosted under different names like the Gold Flake Open, Tata Open, The Chennai Open and Aircel Chennai Open before it was moved to Pune in 2018.

It is now called the Tata Maharashtra Open.

The tickets should go on sale in January 2020 but we are still awaiting confirmation on this. The tickets were priced in the range of INR 150-750 for the first day, to INR 2000 for the final day, for the best seats in the stadium last season. Prices for different categories of seats will vary accordingly. (1 USD approximately = INR 70) 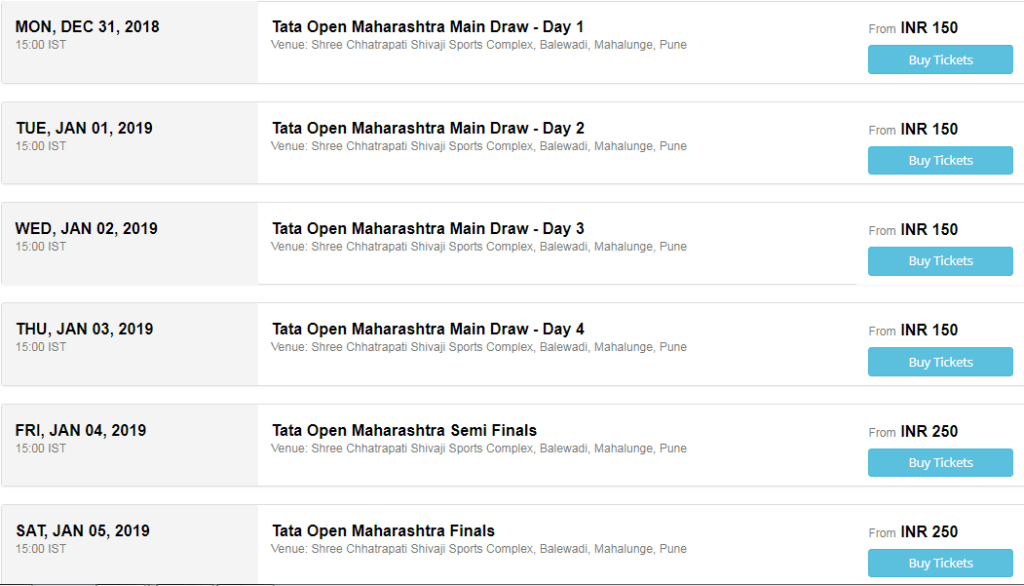 The total capacity of the facility, which includes six courts is around 5000 and while there were talks between the organisers and the likes of Roger Federer and Rafael Nadal to feature in the Maharashtra Open, Marin Cilic and Kevin Anderson are expected to be the leading lights for the tournament this year. Anderson has agreed to feature in the 2019 edition of the Pune Open.

More information on the Pune Open tickets can be found here.

For the 2019 edition of the Maharashtra Open, Kyazoonga.com was the ticketing partner for the tournament that will be played in Pune. The tournament will be hosted at the Shree Chhatrapati Shivaji Sports Complex in Balewadi.

Once the tickets from here are sold out, especially for the latter round of the competition, you can also look at secondary tickets sale websites like Stubhub or Viagogo.

The player list will be released closer to the start of the competition. Last year, this is a list of players who took part in the Pune Open.