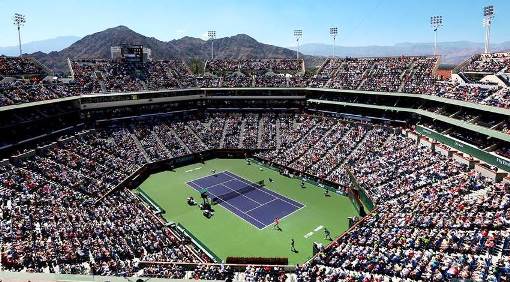 *You can watch live sport on your mobile, tablet or desktop including Soccer, Tennis and Basketball. All you need is a funded account or to have placed a bet in the last 24 hours to qualify.

Outside the four Grand Slams on the circuit, Indian Wells Masters is among the most popular tennis tournaments in the world. It is one of the nine ATP 1000 series tournaments and one of the three WTA Premier Mandatory events for the 2022 season.

The event is also quite popular among the fans, who come in large crowds to attend the event. In the 2015 edition of the Indian Wells, the tournament had roughly half a million visitors and it’s only grown from thereon.

The Indian Wells Open or the BNP Paribas Open is currently owned by Larry Ellison, CTO and co-founder of Oracle. Tommy Haas, a former world number two is the Tournament Director.

While it’s a part of the Masters 1000 event series on the ATP Circuit and a Premier Mandatory event on the WTA tour, it is one of only two tournaments outside the Grand Slams that hosts as many as 96 players in the main draw of the singles competition. The Indian Wells Open was upgraded to be a part of the Grand Prix Super Series in 1987, coming in place of the Philadelphia Indoor event.

The main draw of this BNP Paribas live streaming starts mid-week and goes beyond the customary one-week limit for the other Masters.

The 2022 edition of the Indian Wells Open will be held as per its traditional schedule in March.

The main draw of this year’s competition begins on Thursday, March 10 for men and Wednesday, March 9 for women.

The qualifying rounds will be held in the first half of the week, from March 7 to March 9.

This schedule marks a shift from the October routine which we saw in the pandemic time. Last season, the tournament was conducted from October 6 – 17.

Owing to its timing in the season, the tournament draws in some of the best-ranked tennis players from the men’s and women’s half, all of whom are just starting to get used to the hectic schedule of the tour.

The BNP Paribas Open is played in the quaint city of Indian Wells in California, United States. The city is placed in the Coachella Valley, comprising several popular tourist destinations such as Palm Springs, Coachella, Palm Deserts and many more.

One way or the other, however, you can expect an exciting Indian Wells Masters live streaming this season online as some of the gen-next players get ready to take over the mantle from the legends. Here’s a list of all the seeded players who will be in the singles action.

However, noticeable names like Novak Djokovic, Ashleigh Barty, and Roger Federer won’t be featuring in the competition.

That said, the likes of Andy Murray and Naomi Osaka have been granted wildcards.

By now, you would have realised why the Indian Wells Open is one of the world’s top-notch tennis tournaments and why the demand for the BNP Paribas Open live streaming is so much in demand. Below is a process to be able to watch the tournament online.

There are multiple ways to be able to watch the Indian Wells Open live on your devices. Here’s our first suggestion.

You can catch all the tennis action in 2022 Indian Wells, including the Indian Wells Masters live streaming with bet365.com. Either log in to bet365.com with your existing account or create a new account and deposit a small, token amount of $10 into your account.

Here’s how you can watch the Indian Wells Masters live streaming online with bet365 explained in four short steps.

This site requires you to register with them and then either deposit a sum of $10 into your account (or register as mentioned here) or watch the live streaming by betting on any sport in the past 24 hours. Remember geo-restrictions might apply.

This is geo-restricted, but if you have any other problems accessing the BNP Paribas live stream, kindly let us know in the comments section below.

Much like live-streaming the year’s first Masters tournament with bet365, you can do the same with Unibet, another trusted bookmaker. Unibet also has the live tennis streaming rights to multiple tournaments including the Indian Wells Masters and you can stream this competition live to wherever you want.

The process isn’t too different from the aforementioned one for bet365. Log in or register an account with Unibet here, deposit a small amount and subject to geo-restrictions, you would be able to watch the tennis live.

The good news for tennis fans in the UK is that you can trial the Amazon Prime services for a month for free and cancel your subscription at any stage during that time if you don’t quite enjoy it. Sign up with Amazon Prime to watch the Indian Wells Masters on a free trial.

In order to subscribe to the Amazon Prime Video (in the UK only), you can opt for a 30-day free trial by signing up with them to watch the Indian Wells Masters live stream.

You can also look to watch the Indian Wells Open live streaming online by subscribing to TennisTV.com and WTATV.com. TennisTV.com subscription costs $14.99/month while WTATV.com can be subscribed for $9.99/month.

How to Listen to Indian Wells Masters Live on Radio

You can also listen to the Indian Wells Masters live or listen to its highlights using the various options mentioned here.

What Happened at the 2021 Indian Wells Open?

Considering that the BNP Paribas Open last season was played in a pandemic-stricken year (and also quite late in the season), an absence of formidable talent could be noted.

The draw featured no former winners, guaranteeing a new champion in 2021. Rafael Nadal and Novak Djokovic were absent from the tournament, thus awarding the top two seeds to Daniil Medvedev and Stefanos Tstisitpas.

The event featured plenty of next-generation players like Andrey Rublev, Alexander Zverev, Casper Ruud, Denis Shapovalov, among others. At the same time, there was plenty of experience to go around in Diego Schwartzman, Pablo Carreno Busta, Gael Monfils, Grigor Dimitrov, and Roberto Bautista Agut.

The seeded players received a bye into the second round. Barring a few players – notably Felix-Auger Aliassime and Sonego, each of the seeds won their opening round-bouts and reached the third round. And that’s where things got interesting.

The mid-rounds saw shocking exits of Rublev, Medvedev, Berrettini, Sinner, and other formidable players. Among the top seeds, Tsitsipas, Zverev, and Hubert Hurkacz made it to the quarterfinals. The rest of the elite eight was comprised of Taylor Fritz, Basilashvili, Cameron Norrie, Schwartzman, and Grigor Dimitrov. Interestingly, all of them were seeded players.

Norrie was particularly impressive in the late stages; he overcame Schwartzman and Dimitrov without dropping a set to reach the final. Nikoloz Basilashvili, on his part, also did well to defeat Tsitsipas and Fritz.

The action in the women’s half was just as exciting with Paula Badosa emerging as the new champion.

The 21st seeded Spaniard, in her journey to the title, surpassed many prominent players like Dayana Yastremska, Cori Gauff, Barbora Krejcikova, Angelique Kerber, Ons Jabeur, and finally Victoria Azarenka. In fact, her final match against Azarenka went to three sets (7-6(5), 2-6, 7-6(2)) and created a new record for the longest women’s final played at Indian Wells.

Speaking of Azarenka, the Belarusian enjoyed a great resurgence on the tour by building some valuable momentum. Her run to the final entailed wins over Magda Linette, Petra Kvitova, Aliaksandra Sasnovich, Jessica Pegula, and Jelena Ostapenko.

Meanwhile, top favourites like Simona Halep and Iga Swiatek were handed early defeats, respectively by Sasnovich and Veronika Kudermetova. Karolina Pliskova couldn’t fare that well either as she succumbed to the Brazilian lucky loser Beatriz Haddad Maia in the third round. Similarly, Garbine Muguruza was shocked in her opening match against Ajla Tomljanovic, losing in three sets.

However, the event did bring out some positives for rising stars like Jabeur and Anett Kontaveit, both of whom reached the quarterfinal.

Kim Clijsters also participated in the event for the first time since 2011.