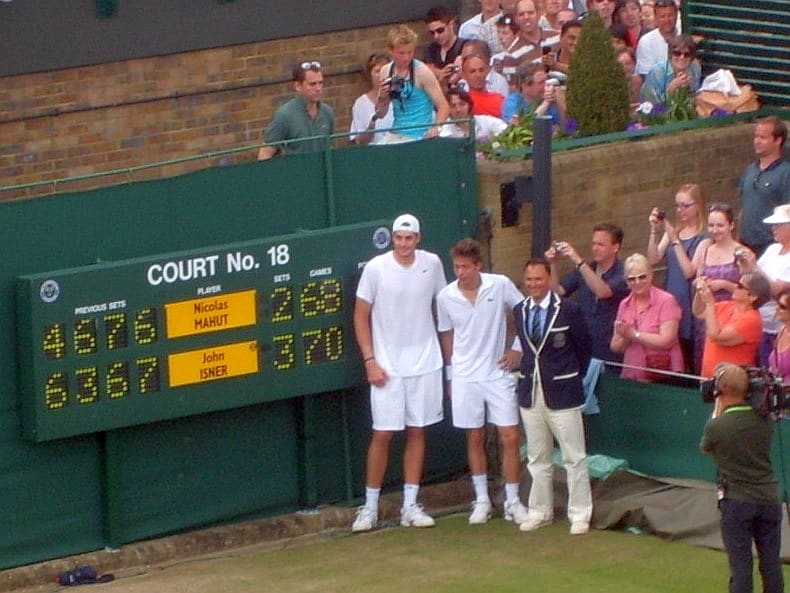 On June 22, 2010, an ordinary match took an extraordinary turn. What was supposed to be a simple first round match, turned into a historic milestone, the likes of which would thrust the two competitors into worldwide recognition and is known for what became the longest match in tennis history.

John Isner entered the event as the 23rd seed, while Nicolas Mahut had entered the main draw after qualifying by winning three rounds.

Mahut, born in Angers in 1982, began his tennis journey by attending a tennis boarding school from the age of just 12. He was a promising junior’s player, winning the French championship at 15, 16, 17 and 18.

The Frenchman reached the junior Roland Garros semifinals and also winning the singles title at Wimbledon in 2000. He turned pro in 2000.

Mahut then went on to have a distinctive career, especially in doubles. He has completed the Career Grand Slam in doubles, winning all four slams at some point in his career.

John Isner was born in the USA in 1985. He turned professional in 2007, going on to reach a career-high ranking of world No. eight.

The American has twice reached the quarterfinals of the US Open and also the semifinals of the Wimbledon once in 2018. His biggest victory came in 2018, when he won the ATP 1000 Miami tournament.

Isner and Mahut walked on to court No. 18 to play their first round match on June 23, 2010. Little did they know, they wouldn’t be completing the match any time soon.

In fact, they would play a total of three days just to conclude their first round match. The stakes were not particularly high either. They were fighting for a place in the second round of Wimbledon. Neither was expected to take the event by storm with their tennis prowess. 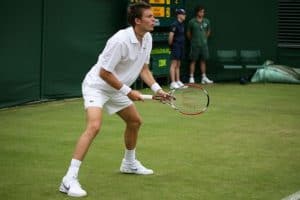 But they showed they had what it takes to be part of tennis – the fight within.

The match lasted a whopping 11 hours, five minutes. The fifth set went on for a good eight hours and 11 minutes on its own.

To put matters into perspective, the previous longest match in a Grand Slam was between Fabrice Santoro and Arnaud Clement, which went on for a little over six and a half hours. That is 98 minutes short of the fifth set alone between Isner and Mahut.

Ironically, Clement was Mahut’s coach this time around. It is admirable that both never lost their will to win; they were both doing their best to keep their serves.

The funny thing is, either player could have simply dropped off, slightly even, and gone off home having known to have made history. Something neither was going to do by winning the tournament. But both players kept on going, determined to be the one to emerge victorious.

It is admirable both players showed no signs of giving up. As the fifth set kept on extending, it possibly became more difficult to even think of losing the match having come so far. Thus, both Mahut and Isner kept going.

At one point during the second day of play, even the technology could not keep up. The scoreboard remained stuck at 47-47, refusing to budge. IBM later confirmed that it was designed to only go up to 47-47. They later reprogrammed it to keep going for the next day.

It wasn’t always the most exciting match either. Here were two good servers, doling out aces to keep their part of the job clean and efficient. 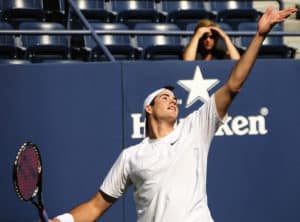 Isner was not particularly known to be a good returner anyway, while Mahut was finding it difficult to get something substantial on Isner’s serve. By the end of the match, Isner had hit 112 aces to Mahut’s 103, both obliterating the previous record for most aces in a match.

It was 78, by the Croatian Ivo Karlovic.

By the third day, the match was world news. Everyone was discussing it, well beyond just tennis fans, experts and pundits. The screen on Henman Hill too was screening this match. The court No. 18 was as packed to the rafters as could be. So much so, that at one point, Isner’s agent could not find a spot, having left for a little break.

Finally, on the third day Isner emerged as the winner, with the score reading 6-4, 3-6, 6-7, 7-6, 70-68. Isner hit a backhand winner to end this epic once and for all. Unfortunate as it may seem, Mahut was left with nothing to show for all his effort.

But Isner did not last too long either; as one would have expected, he was left with pretty much nothing in the tank. His second round match was a blip compared to his first round. It lasted just 72 minutes. Isner faced a relatively unknown Thiemo de Bakker, who won 6-0, 6-3, 6-2.

The end of the match saw the players being awarded champagne flutes in a special ceremony right there on court.

Mahut wept in the locker-room having come off the adrenaline high that was sustaining him through the final stages of the match. It was the one match he did not want to lose, and yet he had, as cruel as it sounds.

To his credit though, he went out again in three hours for his doubles match. Ironically, it was scheduled on the same court. He believed that conceding that match would have felt like another loss and he did not want that at all. He did eventually lose the match in four sets.

Isner, for his part and credit, was subtle in his celebrations. The two shared a warm embrace at the end of the match. Mahut even wrote him an email a week later for he could not remember if he had congratulated his opponent on his victory.

He lauded Isner for his demeanor post-match and the fair-play he displayed throughout the match.

The two men now share a good bond of friendship, having experienced something so incredible on the battlefield.

Surprisingly, the punishing match between Mahut and Isner did not prompt any change in the format of the five-set slam matches.

That would happen after another long and punishing match in 2018, once again featuring Isner. Isner faced Kevin Anderson in the semifinals at Wimbledon in 2018. It was expected to be a tight match, with both players very good servers, difficult to break.

The first three sets all went down to the wire to tie-breaks, with Anderson winning the first and Isner the next two. Anderson somehow managed to break Isner once in the fourth set to level the match at two sets all. Then came the fifth set.

The fifth set went all the way to mid-20 in sets until a victor emerged. Isner must surely have thought “not again!” while he was playing the fifth set.

Anderson finally took the final set 26-24. But once again the gruelling semifinals left him with nothing left to give in the finals of the Wimbledon. To top it all, he faced a rejuvenated Novak Djokovic for the title.

Anderson did his best to put up a fight, but it was all too much for the South African after the draining previous match. Djokovic won the title with a straight sets victory 6-2, 6-2, 7-6.

After this match it was finally decided that a change was indeed needed.