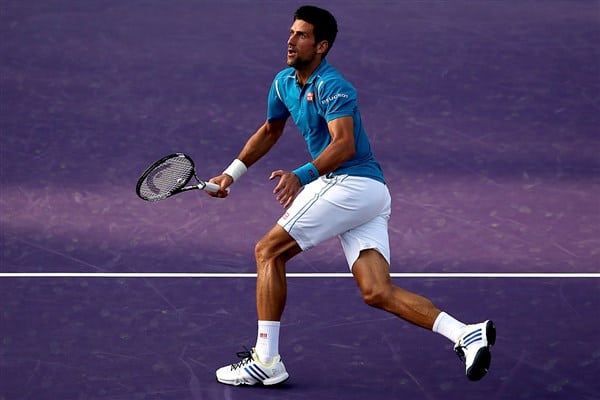 How to Buy 2020 Miami Masters Tickets

The 2020 edition of the Miami Open, also known as the Miami Masters, will be played in March-April. And if you are looking to buy the Miami Masters tickets, this is a good place to understand all your options and accordingly decide which tickets to buy.

Also, we have information on the Indian Wells Open tickets here, in case you are looking to buy those!

When will the 2020 Miami Masters Tickets be released?

The individual session tickets will be out for sale for November 18, 2019 and below you can find all the information on how you can purchase these tickets for the 2020 edition of the tournament. Various options can be found below.

This includes single session, tournament package deals, mini plans, luxury seatings and group bookings and the following tickets information can be found below.

How much do the 2020 Miami Open Tickets Cost? [Miami Masters Ticket Prices]

The single session tickets will be released in November 2019, and more information on its prices will be out at that time.

To understand more about the Luxury Experiences, you can get in touch with the Miami Open by calling them at 1-305-943-6736 or emailing them at MiamiOpen@HardRockStadium.com.

The following Luxury Experiences can be enjoyed at the Miami Open for the 2020 edition:

More information on the pricing for these luxury experiences can be obtained by contacting the organisers here.

As the name suggest, this allows patrons to get discounts on opting for group tickets for single session. There won’t be a per ticket fee applicable on this, and the entire group of people, family or friends can all sit together.

There seven plans under this category. They are as follows:

April 3-5, which will include reserved seat tickets in the Stadium Court for the Men’s semifinals, Women’s Final, and Men’s Final
Ticket Price: Starting at $375.

Week One, March 25-29, will include reserved seat tickets in the Stadium Court for day sessions in the first week.
Ticket Price: Starting at $275.

Week One, March 25-29, will include reserved seat tickets in the Stadium Court for the night sessions in first week.
Ticket Price: Starting at $175.

Week Two, March 30-April 3, will include reserved seat tickets in the Stadium Court for day sessions in the second week.
Ticket Price: Starting at $225.

Week One, March 30-April 3, will include reserved seat tickets in the Stadium Court for the night sessions in second week.
Ticket Price: Starting at $250

March 27-29, will include reserved seat tickets in the Stadium Court for both, the day and night sessions.
Ticket Price: Starting at $350

Every Grandstand Match – Watch every match at Grandstand.
Ticket Price: $550. Founding members will be given discounts.

You get to watch all 24 sessions of the tournament at the Stadium Court, sitting at the same seat. Also includes access to the grounds and General Admission seating for Grandstand matches.

You can also consider buying ticket packages if you are looking to attend the event for multiple days. This is a good deal since you can save as much as 40% in comparison to individual tickets.

The Patron Sponsorship Package includes access to the Level 100 seats for the duration of the tournament. It comes with exciting benefits like name recognition at seat location and entrance, parking vouchers, access to lounge with complementary snacks and beverages, meal vouchers and many more. The tickets start at $3,525 per person.

The next deal is the Championship Series package, which comes with seats on the Level 300. While no perks are included here, you do get access to all the matches in the tournament (including the ones played at outer courts). Here, the prices start at $1,400 per person.

You can also buy packages for opening weekend or the finals weekend, depending on your preference. However, the seats here are available for only 400 Level category and the prices here are a little over $200.

If you are looking to entertain a group of people, then the packages like Patron Sponsorship and Hospitality Suites are the way to go. For prices, you need to contact the customer representatives at Miami Open. These packages come at a steep price, but it is worth every penny. In addition to the benefits you get, you will also be treated like a royalty.

If you are visiting Miami on a vacation, then their Vacation Packages are the best deal you can get. The prices will fetch you a three consecutive nights stay for two in one of their partner hotels like Ritz Carlton, JW Marriott Marquis or Hyatt Regency, depending on the package chosen. Correspondingly, you get access to seats in the Levels 100, 300 or 400.

The Gold Package will fetch you Level 100 seats and stay in Ritz Carlton or JW Marriott along with other benefits, for a price of $6,000.

The Silver or Bronze Package will get you the seats in the lower categories, along with the stay in Hyatt. The rates here vary between $1,175 – $2,200. Remember that the prices here are for two people.

You can also browse through the VIP Experience programs, which entail, as the name suggests, treating the patrons like a VIP. Depending on the package you choose, you can get access to Courtside Box to enjoy the match, or you can even be a part of the player coin toss!

Yes, you read it right.

If you choose the Player Coin Toss package, you get to go down in the middle of the court to toss the coin and decide which player serves first. Of course, this also includes taking your picture with the tennis players. Additionally, you also get access to Collectors Club for lunch or dinner.

The prices for these programs can vary anywhere between $2,750 – $2,970 for two people. If you have a MasterCard, you can save roughly $200 on these tickets.

The Miami Open is played at the Hard Rock Stadium, hosted by the Miami Gardens in Florida. The 2019 edition of the Miami Open was the first time it was hosted at this venue after having been played at the Tennis Center at Crandon Park in Key Biscayne, Florida for the three decades before that.

How to get to the Hard Rock Stadium for the Miami Open?

If you coming to the Hard Rock Stadium for the 2020 Miami Open from the Miami International Airport, it will take you little over one hour to reach your destination. From the airport you will need to get to Mia@Lower Level Ramp and take a shuttle to the Miami International Airport Station. From there, you will have to take the 297 number bus to NW 27 Av & 199 St following which there’s a kilometer walk to the stadium.

Other than Bus-297, there is also another, Bus-99 that has its route close to the stadium.

If you want to get to the tennis stadium to watch the Miami Open from the Miami Beach, you will have to take two buses, lines 150 and 297 to get there or you could opt for 119 and 99. A taxi or Uber would be a far costlier option but will get you to the Hard Rock Stadium in about 25 minutes.

The list of all the participating players will be revealed closer to the start of the competition but some of the top players like defending champions Roger Federer and Ash Barty, along with Serena Williams, Simona Halep, Angelique Kerber, Novak Djokovic, and Rafael Nadal will all be a part of the tournament.

The following is the rough list of players who could be featuring in the Miami Open 2020 but we will update it once there’s more information on it.

What Happened at the Previous Miami Open?

Federer overcame an injured John Isner in straight sets to win the competition, dropping just one set in the entire tournament in the process. That came in the second round against Radu Albot before he crushed Filip Krajinovic, Danill Medvedev, Kevin Anderson and Denis Shapovalov to set up a decider with his American opponent.

Top seeded Novak Djokovic had a tough one, losing in the fourth round to Robert Bautista-Agut, while second and third seeds Alexander Zverev and Dominic Thiem were both dumped out in the first match they played.

The women’s singles champion Barty won her first ever title in Miami, when the 12th seeded Aussie beat the fifth seeded Karolina Pliskova in the final of the tournament. Barty had earlier sent Anett Kontaveit, Petra Kvitova, Kiki Bertens, Samantha Stosur and Dayana Yastremksa to make it to the final.

Pliskova had an easier draw, not facing a single seeded player till she reached the semi-final where she was up against the second seeded Simona Halep. The Czech came through a 7-5, 6-1 winner in that match to set up the title-decider.