How will the year 2020 shape up for Rafael Nadal? Here’s what we believe could happen in this upcoming year for one of the contenders for the greatest of all times tennis players, Nadal.

For a player who has been written off by many at different points this past decade, given his injury prone self and some of the near career ending injuries he has had, Nadal has only come back stronger each time and proven himself to be almost super human on more occasions than one. With all his achievements and truly among the all-time greats of the game, what can we expect from the ‘King of Clay’ in 2020?

At 19 Grand Slam titles, Nadal is one short of equaling Roger Federer’s all time record of 20 major titles and one would think 2020 will be the year that the Spaniard will get to that number 20. Nadal has been most consistent of the ‘Big Three’ in recent times in majors and continues to prove himself to be not just the ‘King of Clay’.

However, here is a look at some broader insight into his 2020 season.

With an increase in the abilities and improvement in the results of the ‘Next Gen’, Nadal’s inherent challenges on the faster surfaces will only deepen.

Roger Federer and Novak Djokovic have always been his biggest challenges on the faster courts, but with the likes of Stefanos Tsitsipas, Alexander Zverev, Daniil Medvedev and plenty more increasing in skill and confidence, it will be difficult to foresee the Spaniard win titles such as Wimbledon, Paris Masters, ATP Tour Finals and perhaps even the Australian Open. The Big Three are inevitably getting a touch slower and there is plenty of young firepower to unsettle the seasoned with a fast and powerful game.

In 2019, Nadal’s successes on the faster courts involved titles at the US Open, Canadian Masters and a runner-up at the Australian Open, among deep runs elsewhere.

Our Prediction: Repeating such a list in 2020 seems unlikely with the slower courts at Flushing and a favorable draw being his best bet. With the advent of the younger crew, TWL believes winning Masters 1000s on the faster surfaces in the best of three format looks challenging for the Spaniard.

After having spent years dominating the clay season from Monte Carlo to Roland Garros with Barcelona, Madrid and Rome in the middle, Nadal faced some challenges at the different tournaments in 2019.

Semi-final losses at Monte Carlo, Barcelona and Madrid followed by titles at Rome and Roland Garros was the course in 2019. Expect 2020 to be similar or more challenging with the likes of Tsitsipas and Thiem and others improving rapidly, and it will be difficult to envision him win more than one of the Masters 1000s on clay.

Our Prediction: Nadal to win just one of the Masters 1000 title on clay 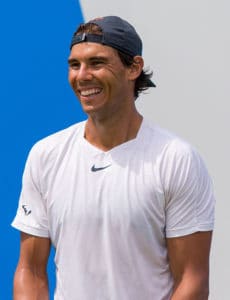 Apart from being the overwhelming favorite in every clay court tournament he plays, Nadal has continued to prove how he can succeed on almost all surfaces (with quarter-finals or better at all slams in 2018-2019), thus making him a viable contender at all majors.

While he will face his challenges during the season, expect Nadal to win his record equaling 20th title this year. Wimbledon continues to be among his less favorite slams, but tennis enthusiasts can expect to see him lift the silverware at one of the other slams, with Melbourne being less likely.

Although the French Open is the obvious slam that one would expect Nadal to win, TWL believes that winning a title at Flushing is just as likely.

Our Prediction: Nadal will win his 20th Grand Slam in 2020

Year End Number One Only Gets Harder

As the ‘Big Three’ continue to weaken their stronghold on the major title winners names with the advent of Next Gen and more, the equitable distribution of ATP points across the year is evidently more widespread. With the Next Gen expected to finally step up on the bigger stage in 2020 and onwards, any member of the Big Three not only has their age old rivals but also several other viable contenders to face up to, sometimes relatively early at major tournaments.

Winning major titles will continue to get more challenging and with Nadal often facing fitness concerns (or finally choosing to play a limited schedule), year end number one will be a difficult and unlikely proposition for him (just as it has been for Roger Federer in recent years).

Our Prediction: Expect Nadal to feature in the top three of the ATP year end rankings, but he will not end 2020 as the number one ranked player in the world.

With 12 French Open titles under his best, Nadal begins the year as the overwhelming favorite for title number 13 at Roland Garros.

Although he has started slowly in recent years during the clay season, he is almost always close to his best by the French Open. Roger Federer and more recently Novak Djokovic have never managed to dethrone him in Paris, and although his apparent ‘heir on clay’ Dominic Thiem has played him in the last two French Open finals, Nadal has been relentless as he is well known to be on the clay.

The likes of Thiem (and his peers like Medvedev, Tsitsipas and others) have gone from strength to strength in 2019, and come French Open 2020, this year looks more likely than any has looked, to dethrone Nadal at Roland Garros.

The Spaniard will definitely feature in the latter stages at Roland Garros, but based on the draw, a quarter-final or semi-final match up against the likes of Thiem and peers may well see the end of the golden run in Paris.

The above only makes it more evident that we may well be towards the end of the ‘Golden Big Three’ era of men’s tennis. With age and fitness catching up with them (sooner or later), and then ‘Next Gen’ knocking on the doors more now than ever before, tennis is in for some interesting times beginning 2020.

Our Prediction: Tough to count Rafa out but he might need a get-out-of-the-jail performance on the lines of the 2019 Wimbledon final to win it.

However, whatever we tennis enthusiasts, experts and others may do – one can never count out Rafael Nadal.

About Samir Talwar 940 Articles
Samir is a New York based Wall Street credit analyst, who is always ready to get into analytical discussions on the men’s tennis circuit. He loves his tennis & cricket.