In April, American tennis player Jared Donaldson spent more than a minute in an eyeball-to-eyeball confrontation with umpire Arnaut Gabas at the Monte Carlo Masters, when Gabas incorrectly ruled in a shot from his opponent.

The following month, former world number one, Karolina Pliskova, was so incensed at the end of a match in Rome that she literally bashed a hole in the umpire’s chair with her racquet frame.

And then spectators at the Nottingham Open final last week were treated to the sight of Britain’s Johanna Konta berating the umpire and shouting, “It’s an absolute joke. You’re making decisions that affect our lives. Do you fully understand that?”

Player anger and dissent is nothing new in tennis, of course. Few can forget John McEnroe and his famous rants that became almost the same fundamental part of his game as his backhand and service.

McEnroe’s contemporary equivalent is probably Australian Nick Kyrgios, a serial offender, who threatened to stop playing in 2015 Wimbledon first round match against Diego Schwartmann and threw the words “dirty scum” in the direction of the umpire’s chair. 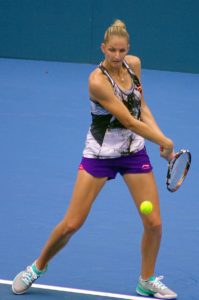 And even multiple Grand Slam winners are not immune, as evidenced by Serena Williams in the 2011 US Open Final, who told Greek umpire Eva Asderaki that she was “unattractive inside” and called her a “loser” before adding, “I completely despise you”.

Williams was fined US $2,000 for her outburst whilst the fine levied on Pliskova was described as being in “four figures”.

But is that enough? Pliskova has earned US $1.5 million in prize money so far this year alone and US $12.3 million over her career to date. Williams dwarfs that with career prize money of close to US $85 million.

Umpires do have the sanction of awarding penalty points and, in theory, can default a match but, in practice, these penalties are rarely applied.

Perhaps then it is time to introduce a card system, such as been used in football for years, and has since been adopted by other sports, such as Rugby, Hockey and even Cricket. Under such a system, a major outburst would be rewarded with a yellow card, and, in the severest of cases, a red.

An accumulation of yellow cards would be totted-up, and, when a player had accumulated three or five, they would automatically miss a tournament. In the event of a red card, the player would automatically default the match and be forced to set out the next event, or even the one after that, if the offence committed was so grave.

Tennis is no longer the sedate polite game which had its origins in the English garden party. It is now a multi-billion dollar industry played by supreme athletes where the stakes are high and the competition intense. Yet the laws of the game and the treatment of on-court disciplinary issues belong to an earlier era.

Measures need to be taken to bring them in line with the modern game. Otherwise, one day a player will go too far, and, in the heat of the moment, angry over a missed line call or a service incorrectly called long, take their frustration out and seriously injure an umpire.

Tennis authorities need to look at this issue urgently, or the famous words of John McEnroe will become a prophecy – “you cannot be serious”.

About Andy Dalziel 1619 Articles
Andy is English but a long time resident of Cyprus. When not writing about tennis and other sports, he is also a Chartered Accountant. In his spare moments, he spends more time than is healthy worrying about his beloved Arsenal.
LinkedIn