When the 2018 US Open seedings are announced, a list of familiar names are likely to dominate the list in the men’s draw – Rafael Nadal, Roger Federer and a rejuvenated Novak Djokovic will be amongst the top seeds, as will Juan Martin del Potro, Marin Cilic, beaten Wimbledon finalist Kevin Anderson and the man he beat in their epic semi-final, John Isner.

Had they been fit, perhaps their rank would have been swelled by Stan Wawrinka and Andy Murray as well.

The thing that all these men have in common is that they are all over 30 or, in the case of de Potro and Cilic soon will be. So what has happened to the younger talent in the game and why has nobody born in the 1990s yet won a Grand Slam men’s title?

One reason seems to be that the older generation are just too good and are a playing to a standard that the younger players in tour just cannot match.

At 36, Federer is of an age when he might have retired by now, but he has won three out of the last seven Grand Slams, whilst Nadal, four years his junior, but hardly a spring chicken himself, has won another of the three. The other one was this year’s Wimbledon, which went to Djokovic, hardly a babe in arms at 31.

And what of the younger generation? 24-year old Dominic Thiem reached the final of the French Open only to be beaten by Nadal, but he is unlikely to thrive on the hard surfaces of New York.

The same could be said for clay court specialists David Goffin and Argentina’s Diego Schwartzmann, whilst Nick Kyrgios might have all the talent in the world, but his consistent inability to harness it, and his litany of on and off, court indiscretions suggests he lacks the maturity to go far.

One outlier is, perhaps, German Alexander Zverev, who is likely to be the youngest of the men’s major seeds at aged just 21, and is the tip of many to be the one to break the hegemony of the older generation at the top of the men’s game. 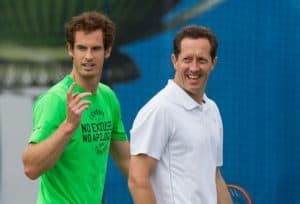 Yet he has only one Grand Slam Quarter-Final appearance to his name so far and, on his two previous visits to Flushing Meadows, he was knocked out at the second round stage.

What we are experiencing now is not normal. Looking back at recent history, Wawrinka was the only man since 2001 to win his first Grand Slam title when he was over 25.

It seems though that, as far as the men are concerned, we are living in a Golden Age of elite older male players, and will have to wait until they have retired for any significant changing of the guard. Until then Dad’s Army continues to be in charge.

About Andy Dalziel 1619 Articles
Andy is English but a long time resident of Cyprus. When not writing about tennis and other sports, he is also a Chartered Accountant. In his spare moments, he spends more time than is healthy worrying about his beloved Arsenal.
LinkedIn